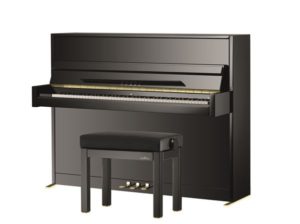 Anyone searching for a wide-ranging instrument at an affordable price might take a look at this elegant 45″ studio piano, a remarkable feat of German engineering using traditionally old-fashioned methods of production (wasn’t it great when they built things to last?). I haven’t encountered a great number of them in my piano tuning work, but the few I have made an immediate and lasting impression on me – largely thanks to their hugely diverse tonal palette.

Here’s a snippet from a Pianist magazine article detailing the superior production of its spruce soundboard:

Anyone can work out that a ‘budget’ upright can’t be made exactly the same way as a concert grand, but differences are rarely spelled out. One important area is the soundboard, the heart of the piano’s tonal response. It’s not simply a matter of which material you use: there is also the question of how you put it together.

There are two fundamentally different methods of constructing the soundboard of a piano, says Simon Loat of Schimmel’s UK distributor, Forsyth Bros. ‘The mid-market tends to be where the two methodologies cross over and explains why two pianos of the same size can produce sounds which are totally different.’

For mass production where speed is of the essence, a flat soundboard is attached to ribs cut with a curved profile, immediately forming a crown once the two are joined. The traditional ‘German’ method, where high humidity straight ribs are joined with a low-humidity soundboard and the transfer of moisture results in the crown, takes around six months. It delivers a richer tonal character, but costs a lot more.

In order to produce the Vogel, a mid-market priced piano with an expensive traditional soundboard, Schimmel makes the soundboard assembly in its Braunschweig factory. It then ships the ‘strung backs’ (soundboard, wooden back frame and bracing and iron frame plus tensioned strings) to the Vogel assembly plant in Poland to take advantage of cheaper labour costs.